I have always enjoyed spending time in Bavaria in southern Germany. The region has always been a place where I can indulge in my favourite things such as train travel, 20th-century history, football, picturesque towns and superb sausages! In fact, I've always referred to this part of Germany as my 'spiritual home'.

The state of Bavaria has been special to me ever since my InterRail tour shortly after the 2006 Germany World Cup and my first visit. I was joined on the tour by Cameron, a friend from university and we spent time touring around Germany, Austria and Denmark by train stopping off in numerous cities along the way for a few weeks.

The most memorable part of the whole train tour was in Munich where we met some local girls in a famous indie club called the ‘Atomic Cafe’ who invited us back to the Oktoberfest later in the year. I fell in love with Bavaria from that moment and have loved the traditional costumes ever since!

A few years later, I was fortunate to win a writing competition run by Deutsche Bahn that gave me another memorable Bavarian holiday after best comparing a football match with a train journey! The prize was two return train travel tickets from Manchester to Augsburg, accommodation and match tickets to the 2011 Women's World Cup with my friend Scott.

The England vs. Japan game itself was pretty poor and we mostly spent the match drifting in and out of sleep after the train journey and seats directly facing the summer sun.

Flights to Nuremberg with Ryanair for £2 each way...

Fast forward a few more years and Bavaria is still remains one of my favourite places in Europe. When I saw that Ryanair had launched a new route to Nuremberg from Manchester from November 2016, I made it an aim to go back.

Amazingly, Ryanair held a £2 each way sale and I only paid £8.16 for two return tickets! This is one of the cheapest flights I have ever bought and at a price that is a modern-day miracle, so I thought that I would treat Jilly to a couple of days away!

Easy access to the city centre and the Motel One...

We arrived at Nuremberg Airport late in the evening and caught the underground train to the city centre. Many Germany cities have an extensive public transport system and Nuremberg is no exception.

The U-Bahn runs across the Franconia region and cuts underneath the Nuremberg Old Town. We got off at the main train station and made the short walk over to a nearby 'Bierkeller' for an evening meal of sausages, sauerkraut and strudel.

We stayed in an excellent and fast-growing chain of German budget hotels called Motel One. There are several in the UK and what I like is the combination of bright colours, modern design and well thought out features at a price that is often the lowest chain hotel price in town.

As I ride past one every day on my way to the train station in Manchester, I've always have been intrigued by the chain, I was pleased to say that the stay at the hotel was excellent and that I will make this my first choice hotel location when visiting Germany or Austria from now on. 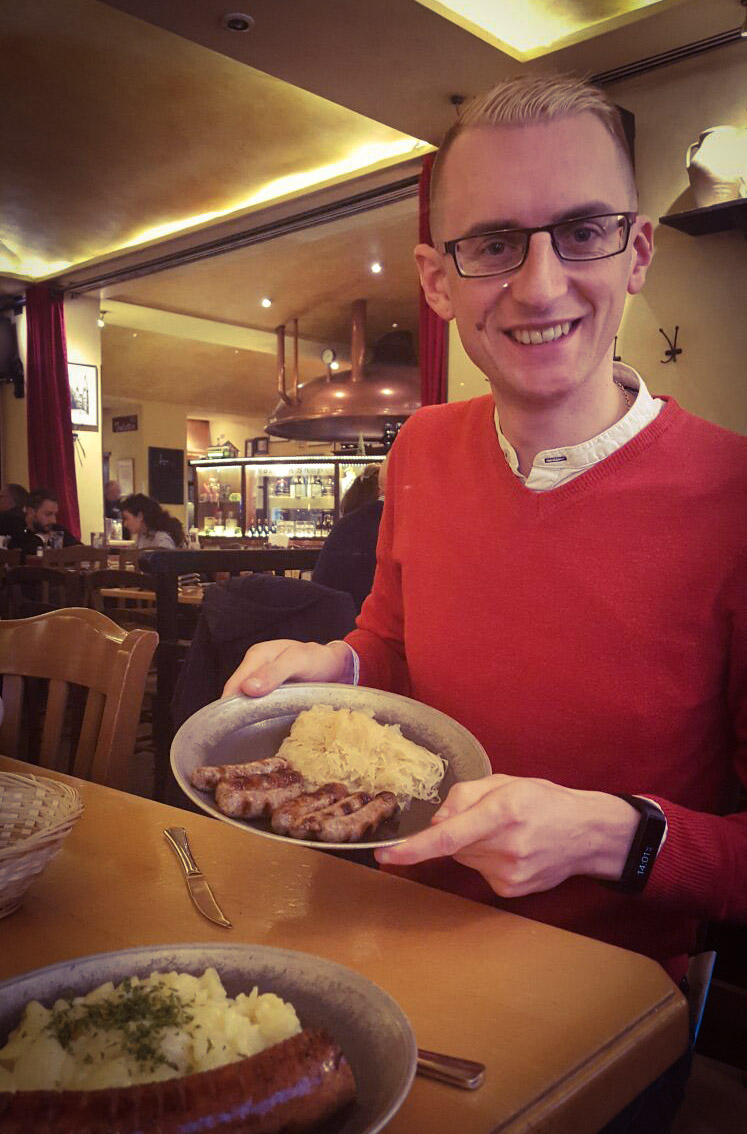 I have been to Nuremberg before, but Jilly had not. We had one day to explore the city and tick off many of the key sights. We started off at the excellent German Railways Museum and learnt a lot about how the railways have shaped Germany’s past and where Deutsche Bahn is heading into the future.

We then walked to the nearby ‘Altstadt' (Old Town) and then onto one of the most thought-provoking exhibitions I have ever been to - The Dokumentationzentrum Reichsparteitagsgelande (Nazi Party Documentation Centre).

Nuremberg is laden with a somewhat tainted reputation in history due to being the site of the mass rallies held by the Nazi Party from 1927 to 1938 and then the Nuremberg war crimes trials after World War II.

The scale of the rallies that took place in the city is hard to imagine unless you see the parade park for yourself and stand atop the platform at Zeppelinfield at the spot where Hitler delivered his speeches to the masses. Over 250,000 would congregate from around Germany each year to lay the foundations of a 1000 year 'Reich' through stage-managed propaganda, use of light and massive stadium building projects.

The area known as Luitpoldhain is located just outside of the city centre and is home to several completed and uncompleted arenas. Designed by Albert Speer, they were designed to evoke power and are reminiscent of both Greek and Roman architecture in style and ideology.

The era-defining film by Leni Riefenstahl - 'Triumph of the Will’ was filmed here in 1934 and is often used in war documentaries to highlight Hitler's rise to power. Interestingly, Riefenstahl’s film is still banned in Germany.

We walked around the D.R museum and the remaining structures and I found these to be fascinating. The exhibits do not analyse or offer an opinion on the rise of fascism in 1930's Germany, but state what happened and when through a timeline. It is only towards the exit do you interpret the scale and destruction that Nazism had on Europe and beyond with harrowing photos of destroyed European cities and the scale of atrocities in the concentration camps.

No cycling, so we went to the football...

The poor weather and constant rain stopped any ambitions of cycling that day, so we decided to see the local football team FC. Nuremberg vs. Wurzburger Kickers in a regional derby. The atmosphere was buzzing and I had my first glimpse of a passionate 36,000 strong German football crowd at the Grundig Arena.

The atmosphere was completely different to English football which is often like going to the cinema. In the Bundesliga, fans can drink beer in sight of the pitch, stand up and chant along to orchestrated songs by a guy on a megaphone! The score was a fair 2-2 draw and even Jilly enjoyed the game.

The next day and prior to heading to the nearby airport, we wandered around Nuremberg in the pouring rain to see the historic castle and the former home of the artist Albrecht Durer in the Old Town.

Due to the poor weather, we didn't really explore much more of the city except to see the world-famous Christmas Markets being set up for opening the following weekend.

Looking back, this was my kind of tour even though I did not go anywhere near a bike all weekend.

I like short trips where you jump on a plane, do as much as possible in an unfamiliar place and then head home. Having just one day to find out more about the city felt like a challenge in itself and the fact that Nuremberg offers so much to the visitor is a real bonus.

If you have been to Munich or Berlin before and would like to see a different side of Germany that is less touristy and more ‘day-to-day’, then Nuremberg should be one city to tick off on the 'lesser-known’ destinations map on Ryanair.com.

Cycling down the Tuscany Coast to Elba

From Zetland Road to Shetland

Through Flanders from Genk to Antwerp

Cycling around Valencia. I'm back!

Competing in the 2018 Footbike World Championships

Cycling from Aberystwyth to Newport Parrog

How to do an international cycling day trip by plane!

Riding railways and bikes in Innsbruck

Scooting around Salzburgerland in Austria

Cycling around Jersey: Part One

Cycling from Frankfurt to Mainz via Wiesbaden

Cycling from Strasbourg to Basel - Part 1

Cycling from Belfast to Lough Neagh

Cycling along the D-Day Landing Beaches

Cycling in Hamburg and the Elbphilharmonie

Cycling from Glasgow to Loch Lomond

Cycling around the Preston Guild Wheel

Oslo by bike, on foot and by boat

Rollerskiing and Rollerblading in Deeside

Cycling around the Isles of Scilly

Cycling to the Lake District 'Honeypots'

Across West Yorkshire with Bike&Go

Cycling from Berwick to Newcastle

I bought a Swifty Scooter!

A weekend in the cycling city of Eindhoven

Day trip to Dublin and Howth

Cycling between the National Railway Museums

Llandudno to Rhyl on the Brompton

Cycling from Port Talbot to Hereford

Cycling down the West Cumbrian Coast

Cycling from Hull to Spurn Point