An epic day of 'monster climbs' in the Peaks...

There’s a reason it’s called the Peak District and an epic day of monster climbs allowed me to experience a taste of the challenging mountain biking trails and rewarding vistas that it offers.

The United Kingdom’s first-ever National Park is ideally positioned within an hour’s drive of Leeds, Manchester and Sheffield – providing you set off early enough to avoid the daily traffic jams on roads like the Woodhead Pass – or alternatively there are reasonably good rail links to starting points if you want to avoid the queues completely.

Yet despite living in Manchester for almost 10 years, I probably haven’t explored the Peak District as much as it deserves, particularly by mountain bike.

Having had the superb ‘Dark Peak Trails’ book out of the library for a while, a gorgeous bank holiday presented the perfect opportunity to get started on the list. I flicked past the simpler Classics to the Enduros section and settled on the ‘High Peak Circuit’ – a 26km anti-clockwise loop with a total ascent of 993m covering a western extreme of the Peaks around Hayfield and Kinder Scout.

Enjoying the stunning views back to Manchester...

To start, a gentle stroll out of Hayfield joined the main loop with a steady but long ascent up Oven Hill Road on increasingly tricky terrain; a climb which soon got me away from settlement and into the Peak District proper, with rolling hills everywhere and stunning views back to Manchester.

The positives of routes like this for the multi-faceted adventurer are that it gets you off the busy roads if you’re more of a road-biker, away from the designated trail centres for mountain-bikers and offers opportunities to chance upon lots of unfamiliar surroundings.

Whilst certain hubs such as Castleton may be following the Lake District and turning into tourist honeypots, the Peak District, in general, seems to be staying relatively unscathed despite its location. The High Peak Circuit would be a perfect long-distance walking route, yet even on a bank holiday, it was totally free from large hordes of walkers and bikers. 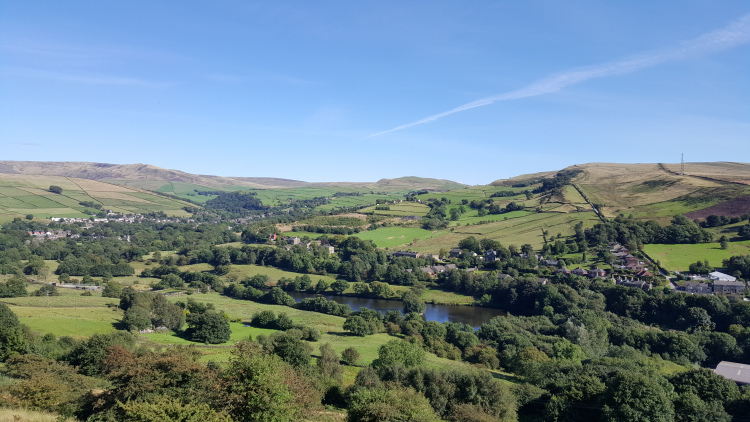 The opening climb was to set the tone of the day with many varied and challenging ascents to come. The first major descent though was towards a crossing of the A624 which took me through the quaint Hills Farm and past the wonderfully named Peep O’ Day Farm, typical of the isolated outposts through which a lot of these trails invariably pass.

After passing a grit-stone quarry, another prolonged tough climb up a loose stone bridleway was ahead, which for the first time of the day required me to have some periods of respite and push my bike uphill.

With only 10km of ground covered in over two hours, I realised it was going to be a much longer day than I originally envisaged. The main route carried on eastwards towards Edale but the dictated loop took me directly north onto peatland trails with the heights of Kinder Scout above me and gave me a first sighting of the famous Peak District red grouse.

Despite it being a beautifully sunny day, a fair share of rainfall in the preceding weeks meant that the tracks were still particularly boggy and maintaining any stability was an effort, before an easier descent took me through open fields down to Kinder Reservoir.

If the previous big climb felt like it was the toughest it could possibly get, the ascent from the reservoir was, without doubt, “hors catégorie” – a steep cobbled path between stone walls moving onto rocky sections which were an impossibility.

It was lucky that pushing was the only option because an accident was waiting to happen for walkers and cyclists alike, with a few mountain bikers tearing down the path as if it was the downhill world championships whilst I pinned myself against the sidewall of the narrow passage.

With just over half of the full loop completed, a stop for rest made me wonder if this was the toughest course I’d ever attempted but fortunately the previous rigours would somewhat cede.

Along challenging singletrack to tarmac...

After passing the grouse shooting cabin, a fabulous yet still challenging singletrack was definitely the highlight of the day, with not another soul around for the 2km descent through acres of stunning heather moorland which ultimately led back down to the A624.

The final third of the route composed of more hills (thankfully mostly on tarmacked terrain) and easy-going bridleways. Not one for weighing myself down with litres of water, I even had to request a bottle refill from a kind lady at a farmhouse with the sweltering day taking a lot out of me.

The charming hamlet of Rowarth suddenly came alive at the surprisingly busy Little Mill Inn on a dead-end road which would lead to (of course) another ridiculously difficult rocky ascent to the final peak; before a drop into the connection with the final gentle kilometre back to Hayfield which formed the opening stretch in the opposite direction all those hours ago.

A demanding 26km off-road loop back to Hayfield...

All in all, a demanding 26km loop was completed in the best part of six hours, albeit with regular breathers, photo stops and map referrals. Although listed in the book as red route, it must surely be bordering on being a black category, as even being someone of above-average fitness, I would definitely class at least 50% of this route as exceptionally difficult.

The guide warned of a wild ride with killer climbs, but I won’t be in a hurry to repeat anything at this extreme end of “leisure cycling” and maybe look for a more mid-level route next, with no pushing required and more conservative terrain.

'Character building' in one of my favourite places...

That said, epics like these are definitely memorable – “character building” some say – and there was the huge reward in exploring a vast amount of scenery over a good-sized area of the Peak District, which is fast becoming one of my favourite places in the country.

Cycling down the Tuscany Coast to Elba

From Zetland Road to Shetland

Through Flanders from Genk to Antwerp

Cycling around Valencia. I'm back!

Competing in the 2018 Footbike World Championships

Cycling from Aberystwyth to Newport Parrog

How to do an international cycling day trip by plane!

Riding railways and bikes in Innsbruck

Scooting around Salzburgerland in Austria

Cycling around Jersey: Part One

Cycling from Frankfurt to Mainz via Wiesbaden

Cycling from Strasbourg to Basel - Part 1

Cycling from Belfast to Lough Neagh

Cycling along the D-Day Landing Beaches

Cycling in Hamburg and the Elbphilharmonie

Cycling from Glasgow to Loch Lomond

Cycling around the Preston Guild Wheel

Oslo by bike, on foot and by boat

Rollerskiing and Rollerblading in Deeside

Cycling around the Isles of Scilly

Cycling to the Lake District 'Honeypots'

Across West Yorkshire with Bike&Go

Cycling from Berwick to Newcastle

I bought a Swifty Scooter!

A weekend in the cycling city of Eindhoven

Day trip to Dublin and Howth

Cycling between the National Railway Museums

Llandudno to Rhyl on the Brompton

Cycling from Port Talbot to Hereford

Cycling down the West Cumbrian Coast

Cycling from Hull to Spurn Point